My website kristinshermanolnes.com, with vlog:  Intrinsic, spot-lights people pursuing their passion and what they learn from doing it.

Our eldest son goes by the name, OSØ, a Spanish word for bear, with the slashed “Ø” an homage to his part Norwegian Ancestry.  Upon his return home for Christmas, he showed me a three-minute video he made.  He had edited it to match the tempo of a song he produced for his ALBUM.  I found his movie “Space Food” intriguing.  Knowing how passionate and prolific OSØ is about crafting original music, I thought he’d be perfect to “practice” my first profile.

OSØ refers to himself as a “Producer.”  A few years ago he explained to me that a Producer takes “samples” (portions of existing recordings) and remixes them.  The product is a “beat” not a song.  Sometimes he digitally creates every sound.  All the sounds in his movie below are original.

He pursues his interest like a job, second to school.  His diligence and meticulous editing of sounds impressed me enough that I once asked him if he’d rather study Music in college, but getting a Bachelor of Science degree in Civil Engineering is what he actually wants to do.  What he said was, “You can’t make a career out of music.”

After his classes and his studies, after working for his Dad (a Civil Engineer) summers and during school breaks, after playing pick-up soccer games, and sometimes before meeting friends, he makes beats.

He works late into the night making subtle revisions and tweaks until he has achieved his vision.

OSØ researched and analyzed copious sounds and images for his movie alone, however, he has identified and perhaps memorized the patterns, rhythms and notes of thousands of songs and digitally manipulated over four hundred beats.

As the co-habitants of his “studio,” what we heard was the constant starting and stopping of a riff.  We heard voice tracks from a movie or an old radio commercial replayed over and over, until it was edited just the way he wanted it.  We listened to melodies and lyrics from India, China, Greece, Mexico.  Name it.  He worked with bits of  folk, polka, rap, hip-hop, or classic rock genres just to name a few.

OSØ sat in his baby-blue bedroom at a reclaimed wooden desk his father made continually tweaking sounds.  He stared at a graph of sound wavelength tracks on his laptop.  Images of his music icon, Jimi Hendrix, watched over him from posters on the wall and a light-switch plate.

I assembled brief clips of OSØ re-mixing a sample in my video below.

Realize that when he lived with us we could listen to no other music.  For years, his sounds dominated our home.  I miss them.  Somehow he’s learned to recognize and to understand his own moods and those of others from his musical interest.  For example, I was in the kitchen having a pity-party about the tediousness of making dinner when he played one of his songs.  His music helped me feel better.

Thinking back, I realized he never announced when his beat was complete.  He’d play it and grin knowingly and pace until I realized I was hearing his “masterpiece.”

OSØ taught himself beat making, however, he has had formal education in music.  Since age nine, he began lessons with Steve Wilkinson in San Leandro.  Steve was an amazing mentor who encouraged him to play guitar by ear, to invent his own solos, and later to read music and understand theory in that order.  He continued taking lessons and playing guitar with Steve once a week until he was eighteen.

Later, as a ‘tween he played guitar in a soft-rock band called “The Cobalts.”  For three years, those kids squabbled among themselves.  Perhaps that is why he prefers the solitary aspect of making beats; he is his own boss.  They had fun performing for families at the Homeschooling Association Conference, a talent show, and a small kid-friendly pub in Alameda.

In his teens, he trained with the Jazz band leader and mentor, Khalil Shaheed.  OSØ performed jazz guitar with Khalil’s youth group, the Oaktown Jazz Workshop, at more “professional” locations such as Yoshi’s, and the downtown Oakland Art and Soul Festival to name a few.

Briefly, he took piano lessons in our home from Marisol Jimenez, a composer from Guadalajara, Mexico, a prodigy in her arena.  At the time, she was obtaining her PhD in Music at Stanford University when he was a teenager.  It became too much for her to trek to our home, but her instruction enabled OSØ to play the piano by ear.  It gave him enough understanding to play piano for his beats.

His interest in Producing beats occurred when he became a member of Bay Unity Music Project “BUMP.”  BUMP introduced him to a real-life recording studio, industry standard audio software, and live performances to help him promote his first album.  Since then, he’s been smitten about Producing.

OSØ has completed two albums and a movie.  His soundtrack, “OSØ – “SLY (Your Love)” enhances the cinematography reel of his talented friend who attends the undergraduate film program at N.Y.U..

Beginning the last half-year of kindergarten until he was fifteen, OSØ was homeschooled.  I think this enabled him to have time to pursue his passion.  Although I’m slightly disappointed that he’s moved away from playing guitar, there’s so much creativity and thinking inside that toe-head I have let that worry go.

OSØ has demonstrated skills of thinking conceptually and abstractly, using reason to explore patterns and their relationships.  He makes songs that he says, “embody their own feeling.”

In the movie it seems that it was easy for you to marry the audio with images, was it?

It was difficult to match the images with the quarter note chops of the song, and I wasn’t able to edit them to perfection. In the first part of the song, I intentionally made the sounds unnerving.  That’s what I was going for.  In the second part of the song, to counteract the chorus, if you can call it that, I made it (the images and the sounds) flowing and serve as a release.

I thought the images you selected to go with the sounds were absurd.  They made me laugh.  The characters in the comic were  “retro,” and a couple of them outright foxy in their space-suit uniforms.

I purposely sat on my ass for two hours and searched for images of astronauts that people wouldn’t expect to see which I found hilarious.  I happened upon this cartoon and I liked the way it was drawn, and I thought it matched the second part of the song, which was more relaxed.

What is music to you? 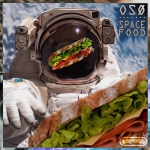 ay to express myself and a way to release stress.

Are you passionate about it?

Yeah, I’ve taught-myself everything I know.

How often do you make music?

Whenever I have time.

How long does it take you to make a song?

How do you begin?

I start with a melody, or I get an idea for a beat.  Sometimes I blend a sample.

That reminds me:  how did you arrive at pairing your music with those archival images in your movie?

The movie was an afterthought.  I made the movie to get my music popular.

It seems that OSØ went to the effort of making a movie to promote one song from his album on YouTube.  Well, based on the array of songs on his album, I’d say he has talent for producing music that is well-suited for a variety of movie genres.

So plug into his links below, grab a drink, put on high-quality headphones, and get into the OSØ zone.

Readers may listen to OSØ’s free “Space Food” download at his ALBUM.   Find his other beats at Soundcloud.

feeds for this album, this artist

This site uses Akismet to reduce spam. Learn how your comment data is processed.